So unlike the last recipe, which was fairly healthy, this one is not. But hey, sometimes you need something rich and comforting. I grew up with my mom making this all the time for us. I’ve updated it a little but otherwise it’s pretty much the same as she’d make it. You can use what ever potatoes you have on hand and as many as you like. I chose 1 pound because it struck a good balance, for me, between being to soupy and too much potato; but you can add as many or as little as you like and it will still work. Enjoy! 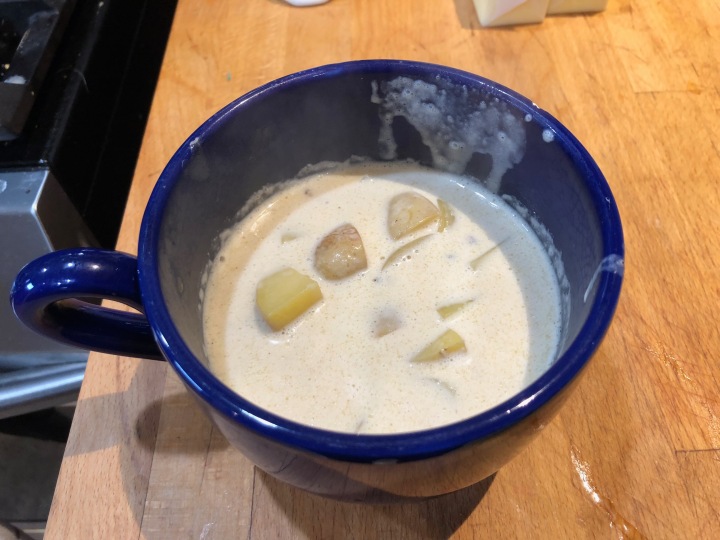 Slice the bacon into bite size bits, about 1/16th of an inch. Add to a pot with 2 tbsp of olive oil. Brown over medium-high heat until the bacon renders somewhat.
What does render mean? When it’s nice and oily, more so than when you put it in. That means the bacon has released some of it’s fat.
Once the bacon is browned add the potato’s and cook for another 3 minutes, stirring so they don’t stick. Add onion and garlic and cook for another 2 minutes, again stirring.
Remove it all from the pot and add the 2 tbsp of butter and melt it. Once it’s melted add the flour, stirring constantly with a whisk. After 2 minutes it should be good. Slowly add the chicken stock stirring constantly. Once incorporated, add everything back in and bring it up to a boil. Once it’s boiling turn it down to low and simmer for about 15 minutes or until the potato’s are tender.
Why do this? It makes the soup a little thicker, which I like. Not as thick as some clam chowders but still thicker than how my mom would make it.
Add the milk, or in my case cream, and bring back up to a simmer. This is the point where you want to taste to see if it needs salt, I’ve never had to add any as the bacon is enough. Add pepper to taste.
Once it’s hot, it’s ready to serve. I like to add a tbsp of butter as a finish, it had a nice flavor right at the end.

My future sister-in-law brought this healthy recipe to my attention. I really like it because it’s vegan/vegetarian friendly, all you have to do it leave out the chicken, add an additional can of beans, and substitute vegetable broth for the chicken broth.

As usual, I did make some modifications. When I first made it with the recipe it came out way to watery for my tastes. I like my chili a little on the thick side.

It’s pretty quick too. Pre-cook the chicken and it’ll take about 30 minutes. I like to make this in my Instant Pot

. You can sauté the veggies in it and them program it to slow cook for however long you need. I can start this first thing in the morning and have it ready for dinner by the time I get home. 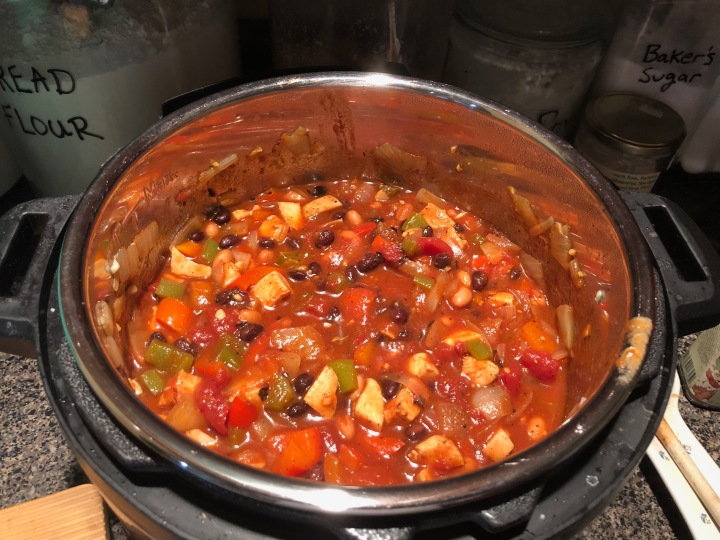 Add in the rest of the ingredients, stir it together, and bring to a simmer. Cover, reduce the heat to medium-low, and continue simmering for another 10-15 minutes.

*Why the asterisk? Chipotles are a tricky thing, you never know how hot they’ll be. So if you’re heat sensitive then you might want to start out with just one. If it’s not enough then you can add another. Or add additional Ancho chili powder.