So the basis of this recipe is from that cookbook my mother gave to me when I got my first place. I changed it a little, added my own version of the butterscotch as I didn’t like they way it turned out in the original recipe. That recipe also called for chopped pecan’s, which I really don’t care for, so I left those out. But feel free to add them back in, they go in the bottom of the pan with the butterscotch. Enjoy! 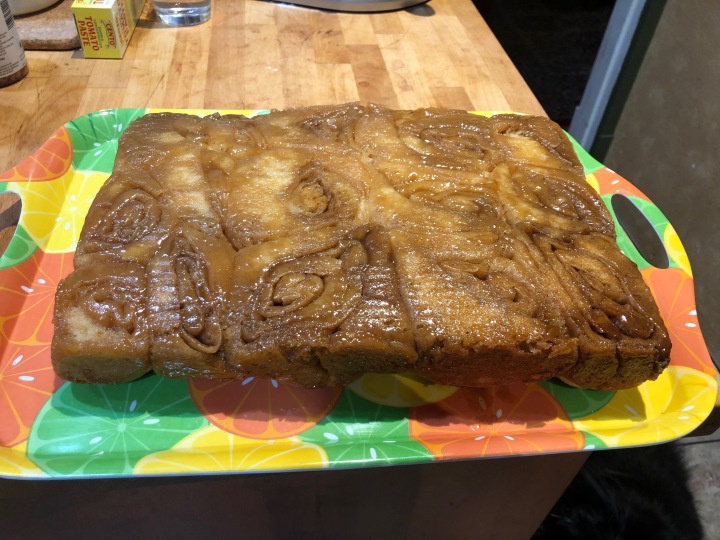 In a small pan scald the milk. What does this mean? Bring it to almost a boil, when you see little bubble start to form around the edges it’s done! Careful, you don’t want to scorch the milk. Remove from the heat and stir in the shortening and sugar until both are melted. While it’s cooling, heat up the 1/2 cup of water until it measures between 110 and 115 degrees. This is important also as that’s the perfect temp for the yeast to get going. Below that and it’s too cold and above that you’re cook it. Either way your rolls won’t rise. I also add a pinch of sugar to the water, this helps the yeast get started as well. If you haven’t figures it out yet, add the yeast to the warm water and stir it until it desolves.

In a mixer, I love my KitchenAid 6 Qt. Stand Mixer

, add 1 1/2 cups of flour and the milk mixture. Stir on low for about 2 minutes. Add the eggs, still on low speed. Once those are combined add the yeast. Now start adding the rest of the flour a 1/2 cup at a time. Keep adding until the dough starts to pull away from the edge of the sides.

Turn the dough out onto a lightly floured board and knead until it’s not longer sticky, about 5 to 10 minutes. Place it in a bow, cover with plastic wrap and let rise in a warm spot until doubled  (about 1 to 1 1/2 hours). Here’s a neat trick, spray your bowl with non-stick cooking spray and then spray the top of the dough as well. This will prevent it from sticking to the bowl and keep it moist as it’s rising.

Roll the dough out until it’s about 16″ x 8″. Take the stick of butter and smear it evenly on the rolled dough. Sprinkle with pumpkin pie spice and brown sugar. Now roll it up and cut into 1″ slices (or thicker if you want tall rolls). Take your baking pan, I use a 14″ x 10″, and pour the butterscotch sauce in the bottom so it’s evenly coated. You won’t use all of the sauce, which is great! You’ll have some extra to pour on top of the rolls when you eat them.Place your rolls, cut side down, in the pan. Cover with plastic wrap and let rise in a warm place for 30 minutes. Don’t worry if it seems like you have more pan and rolls, they will expand A LOT when baking. After 30 minutes put them in a pre-heated oven at 375 degrees. Back for 30 minutes or until nice a golden brown on top. Let cool and then invert onto a tray or plate.

In a large pan over medium heat bring butter, sugars and corn syrup to a boil. Let them boil for about 4 minutes, stirring so it doesn’t burn or boil over. Remove from the heat and carefully whisk in the cream and Scotch – it will hiss and steam like crazy! This is why you’re using a large pot. Whisk in the pinch of sea salt and let it cool.