I started this blog to document my experiences in cooking. Sometimes things don’t work, this is one of those. The flavor was spot on! Exactly what I wanted. Everything else, not so much. Crust to tough, filling too runny, etc., so don’t make this one but I am working on it as I’m sure it can work!

So recently a recipe for a cranberry tart with a hazelnut crust popped up in my Facebook feed. I thought it looked intriguing but I wasn’t super thrilled with the hazelnut crust part. So I went ahead and made the cranberry curd, thinking I would use a regular tart crust instead. But when it was done I wasn’t super thrilled with the curd either. I thought it was kind of bland. Funny, another Facebook friend made the same tart (I’m assuming) and his comment was the curd was bland and he had to modify it to make it work. So I gave it some thought and decided to try making this version, which I made from combining components from a couple of other recipes. You can make this gluten free if you make the crust hazelnut, which was the original recipe. If people are interested I’ll put the crust recipe in the comments. Enjoy! 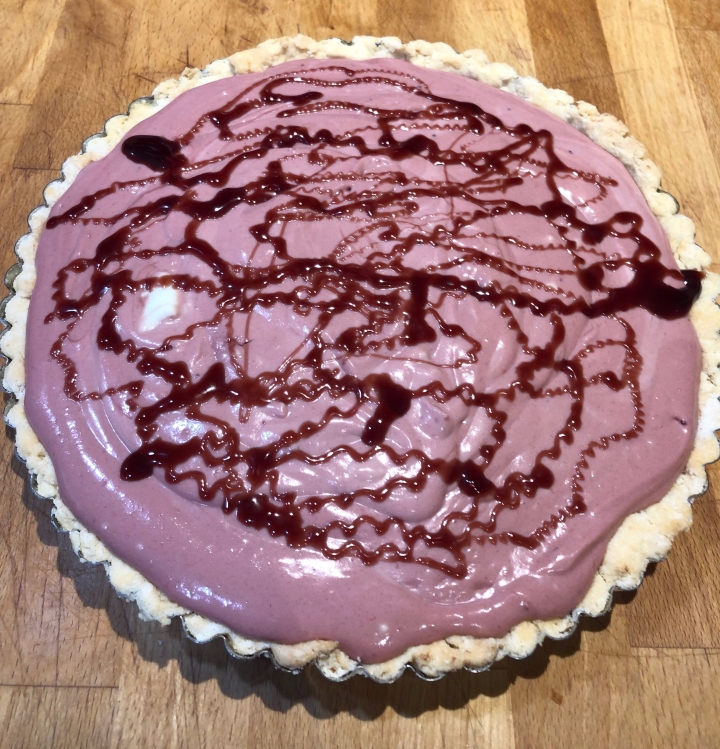 Crust first and you’ll need a tart pan for this. In a food processor, I use my Cuisinart Food Processor

, combine 1 3/4 cups flour, 1/2 cup sugar, the zest of the lemon and a pinch of salt. And a pinch of salt is literally that, you take as much as you can pinch between your thumb and forefinger. Pulse until well mixed. Cut up the butter into small chunks and add to the flour mixture. combined until the flour starts to look like it’s the size of peas. Add 1 egg and mix until it’s just combined. Now press the dough mixture into the tart pan, pushing it up the sided. Bake in a 350 degree for 20-25 minutes or until lightly brown. Let it cool.

Now for the cranberry curd, which is the 1st part of the filling. In a medium pan, over medium heat, add the cranberries and sugar. Take a vegetable peeler and peel the orange, try to get as little of the white as possible with the peal. Now juice the orange and add that as well. Cook for 15 – 20 minutes or until the cranberries are soft and have mostly popped. Transfer to a strainer and press out all the juice. Whisk in the butter until combined and then cool before refrigerating.

Now for the pomegranate. Basically we’re going to make pomegranate molasses, similar to what can be found in my rack of lamb recipe. This will make more than you need but more is never bad. Take 4 cups of pomegranate juice and add 1 cup of sugar. Bring to a simmer, turn the head down to medium-low, and let it reduce until you have about 1 1/2 cups left. This can take a couple of hours. Make sure to keep an eye on it, you don’t want it to be too hot or it’ll scorch and taste awful. Or reduce too much and ruin your pot! Once it’s reduced let it cool before putting into a container and refrigerating.

Now to combine it all together and make a tart! In a stand mixer, I use my KitchenAid Stand Mixer

What to do with some of that leftover molasses? I like to drizzle it on top of the tart as in the picture above.