Like a lot of people, I am trying to include more fish in my diet. I came across this recipe on the internet and it looked good. The original called for Cod but I prefer Halibut instead. I upped the garlic and ditched the parsley. It turned out pretty tasty but next time I’ll increase the amount of spice as it wasn’t as favorable as I had hoped it would be. But then it’s hard to compete with the garlic and lemon. Enjoy! 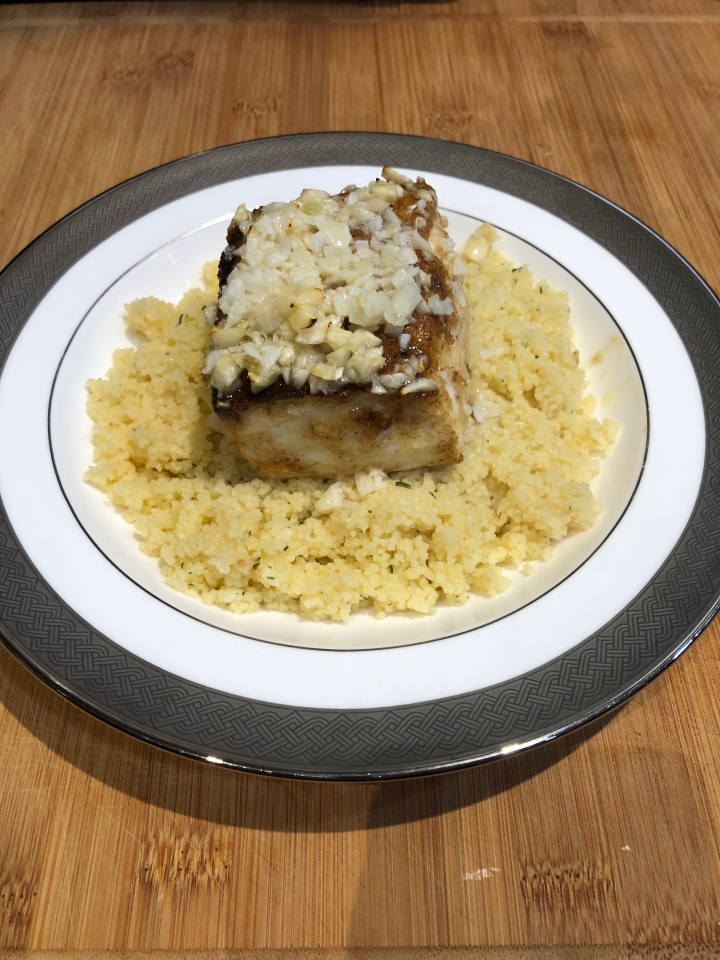 Mix the lemon juice, olive oil, and melted butter in a shallow bowl.

Mix the flour, spices, and salt in another shallow bowl.

In a frying pan that is oven proof, heat the vegetable oil on medium-high heat. Pat dry the fish fillets. Dip them in the lemon oil mixture and then into the flour mixture. Shake off any excess flour. Add the fish to the skillet and brown on each side, about a minute per side.

Add the minced garlic to the remaining lemon mixture and drizzle over the fish. Put in the oven for 10 minutes. Serve with rice or couscous.

This recipe is based off of one from Giada De Laurentis. As the holiday season is upon us, having a good dip to take to parties is essential.  I switched it up a little bit, added some garlic and liquid smoke. Turned out pretty good according to my coworkers. Enjoy! 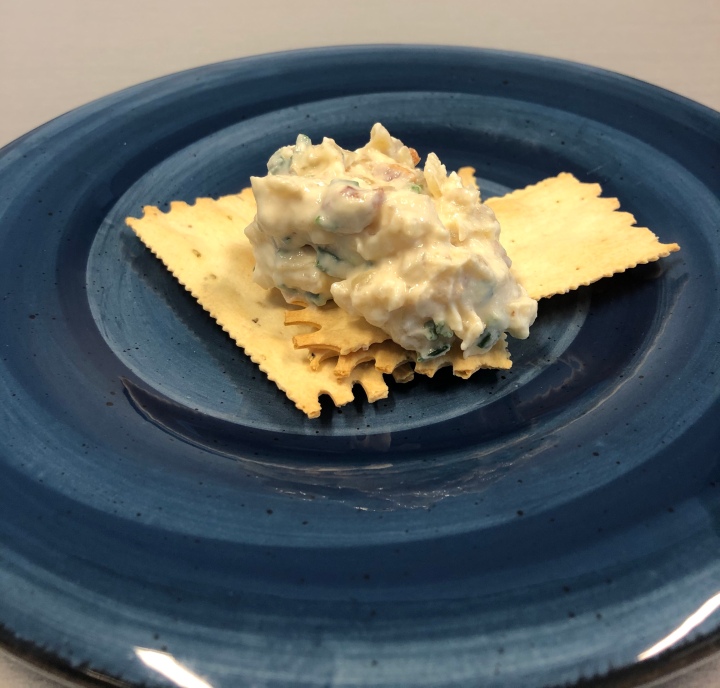 In a medium sized skillet on medium heat, sauté the bacon with olive oil until brown and crispy. About 8 minutes. Use a slotted spoon to remove the bacon and put it on a plate lined with paper towels to catch the excess oil.

Add the onions to the skillet with the salt and sauté in the oil/bacon fat. About 15 minutes or until soft and caramelized. Don’t leave it unattended as it can burn. You’ll want to stir it occasionally.  About 1/2 through add in the garlic. Allow the bacon and onion mixture to cool. Combine in a medium bowl with the yogurt, chives, and liquid smoke. Put in a container and allow to chill for at least 1 hour, longer is better. Serve with crackers, chips or vegies.

I got the idea for this from America’s Test Kitchen. Unlike their version, I don’t finish mine with garlic butter. Keep an eye on it as it’s easy to overcook, which you can tell by my picture I did. It still tasted pretty good.  Enjoy! 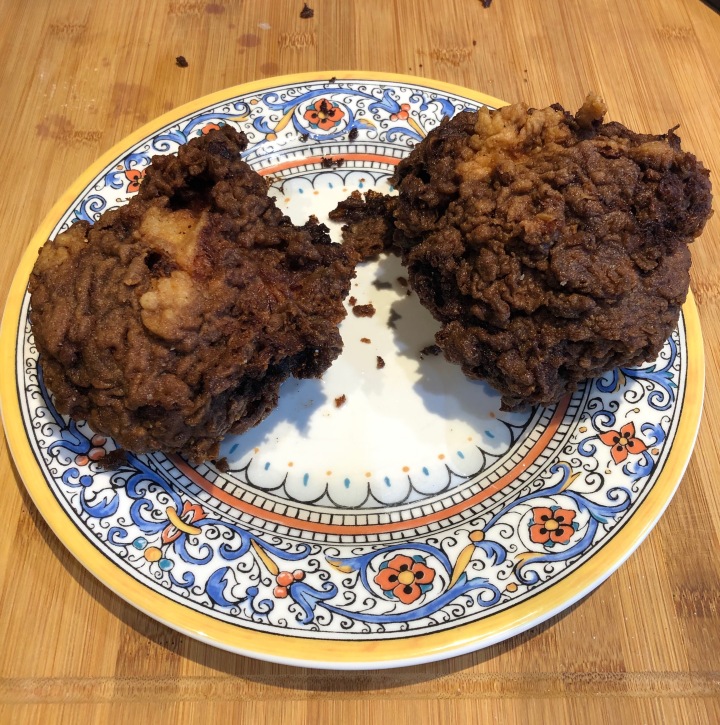 In a ziplock bag; mix together the buttermilk, granulated garlic, 5 Tbsp minced garlic, 2 Tbsp salt, and 2 Tbsp pepper. Add in the chicken and let it marinate overnight.

Heat a heavy pot, like a dutch oven, half full of vegetable oil until it’s 350 degrees. I’m lucky enough to have a Butterball XL Electric Fryer

There used to be a great restaurant in the Capital Hill area of Seattle that was mediterranean, El Greco. It was there that I was first introduced to bread salad, or panzanella as it’s also known as. I was such a big fan that I have since recreated it at home all the time. It’s pretty simple but one of the keys to this is to toast the bread first, then oil it and rub it with cloves of garlic. WARNING! This has a lot of garlic in it. But you can always cut it back. This recipe also uses a couple of what I consider essential kitchen items. First a really good knife designed for veggies, especially tomatoes. I love my Wusthof Classic Wave, Black

. Unlike a flat edged knife, this one won’t “tear” your tomatoes. The other is a chopper. I’m not a big fan of devices that only have 1 purpose but this is an exception. It does a much better job than I can mincing garlic. I have a Cuisinart Stainless Steel Chopper

, which is pretty inexpensive. Again you can always modify the amounts in this for the most part to suit your taste. Enjoy! 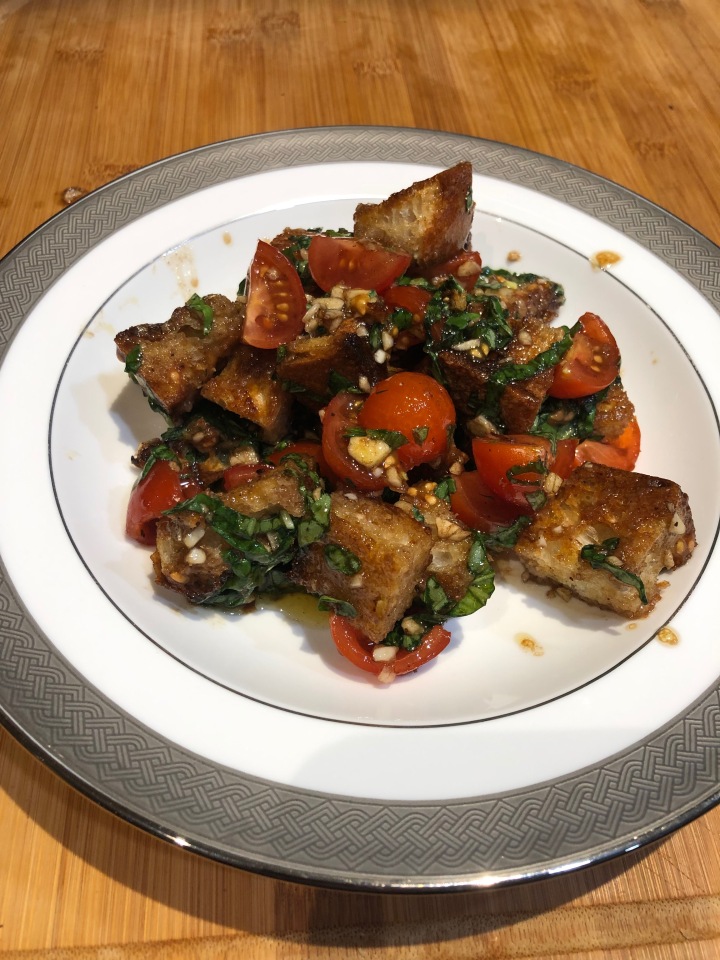 In a large bowl add the quartered or halved tomatoes, minced garlic and basil. *So what does chiffonade mean? Basically take the basil leaves, roll them up like a cigar and cut thin slices. Mix together the remaining oil, balsamic vinegar, salt and pepper; I just use a jar to do this. Pour into the bowl.

Cut the bread into cubes, roughly the same size as the tomatoes. Add them and toss, just before you service as you don’t want them to get soggy.